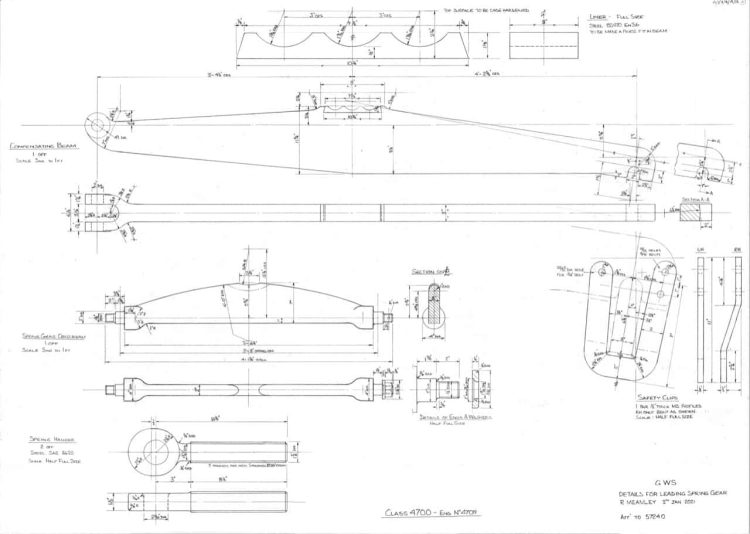 The 4709 Group has released details of some of the design work that is going into creating components for the steam locomotive.

Sometimes, design work can look like a spaghetti of lines on paper, but to some, those designs are detailed and have dimensions that can be made into something.

Recently, Computer-Aided Design (CAD) has been used alongside pens, pencils and papers. However, as a matter of choice, The 4709 Group has done a lot of the preparation work for 4709, especially the cylinders, using old school drawings.

Tyseley’s Bob Meanley was approached to complete the design work, and Bob decided to use traditional design methods, with the first casting emerging from foundry recently.

Paul has also asked Bob to produce drawings to reuse the donor 41XX pony truck on 4709.

The Compensating Beam, vital for running on the mainline, will be cast from a wooden pattern developed by Bob and his drawings.

4709’s Paul Carpenter explained: “Since the 47XXs were designed almost a century ago, the loading gauge requirements have been changed. If our loco is to run on NR’s main line, the new cylinders we were committed to, had to be re-designed to comply.”

“In addition to getting the job done, for an engineer, Bob’s drawings are a thing of beauty. Hand drawn, highly detailed, accurate, dimensioned; just as Churchward’s drawing office might have produced.”

“The assembly drawings are for the pony truck and identified several important differences that have had to re-engineered to achieve the functionality we required. A look at Bob’s work, especially the huge counterbalance beam will give you an idea of how important this work has been.”

“CAD’s great, but there really is nothing like hand drawn detail. It’s the soul of great design work.

Perhaps one day, we’ll have some prints framed and hung in the museum at Didcot to remind people what could be done with basic drawing tools and a lifetime of skill and experience.”

Largs railway line to reopen after landslip repairs are completed Early October saw the RailAdvent team make a visit to the G5 Locomotive Company, who are based in...