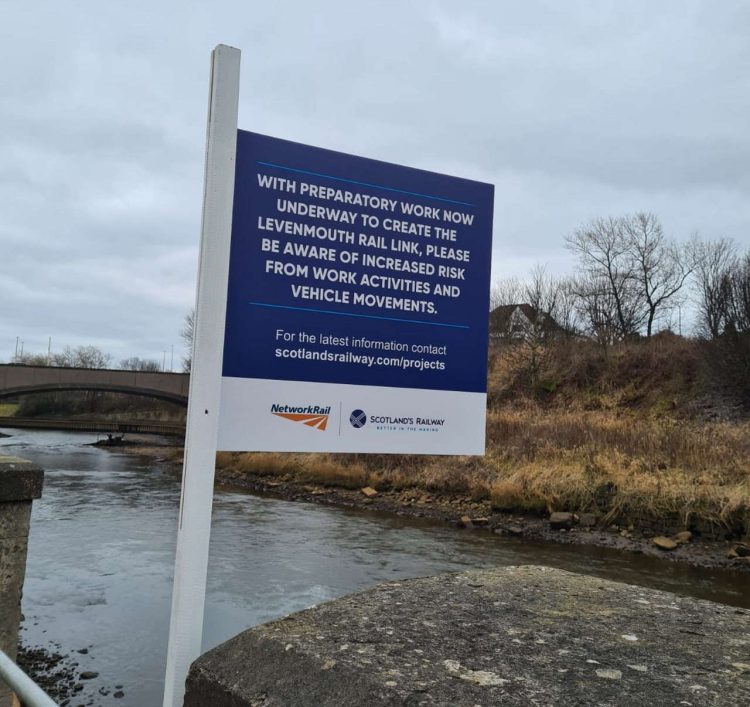 Network Rail are reminding people to be aware as work continues to reinstate the railway line to Leven.

Preparatory work on the Levenmouth project has been underway for a number of months, and Network Rail have now installed a number of signs along the route to remind members of the public of the increased risk in the area around the railway.

Although the line is closed it has always been classed as an operational railway but has been used by local people for walking, running, fishing and nature watching.

Vegetation clearance and site survey and geological investigations have been carried out and further work is continuing before the major construction work begins later this year/early next year.

As part of the project, two new stations will be built along with 19km of track.

Tom McPake, Project manager for the Levenmouth rail link project said; “We understand that over the years, the disused railway has been used by people exercising, enjoying nature and accessing the river.”

“While we do not want to prevent anyone from doing these things just yet, we want to ensure that they can continue to do so safely. There will be more vehicles, more workers and more activity with railway plant and vehicles moving along the railway corridor. It’s for this reason we are encouraging people to be careful.”

“While we would ask people to avoid using the area if they can, we would advise them to be extra vigilant if they continue to do so.”

More information on the Levenmouth railway project can be found here