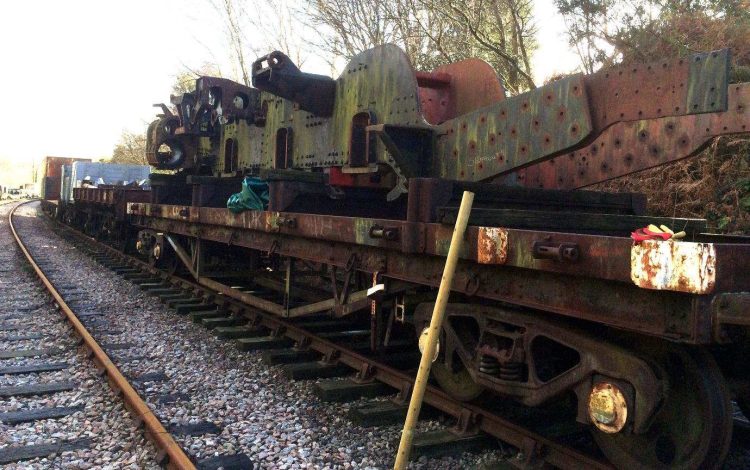 Southern Locomotives Ltd has sent RailAdvent an update on their locomotives, both those in service and those undergoing restoration/overhaul.

No locomotives are currently in service due to the lockdown, but some were used at Christmas time.

Southern Locomotives have advised that all their staff are off furlough in Swanage’s Herston Works to ensure that Eddystone is ready for traffic about Easter time, and essential maintenance is completed on 257 Squadron to ensure that the Railway has sufficient steam motive power to restart services on the 12th April.

All staff are working in a very safe environment which SLL says is ‘probably a lot safer than in the local supermarket’!

The Company advised in January that it needed to raise £40,000 by April to ensure that all of their overhaul projects could continue at Swanage, Tyseley, Bolton, Sellindge and the North Norfolk Railway. This figure was raised by the end of February so with continued financial support there is every confidence that 2021 will be very successful.

After a successful hydraulic test, all steam pipes and fittings have been fitted as well as the smokebox door.

The last few minor tasks are now being completed with just the smoke deflectors, the top coat of paint and lining out to do before being transferred to the Swanage Railway, for it’s booked final steam test.

Donations towards the restoration of Eddystone can be made via the Southern Locomotives Ltd website.

Ron Neal and contractor Peter Pickering are restoring the front bogie for Sidmouth, this will involve white metalling and machining of the axle boxes, as well as overhauling all of the fittings. Once this is finished, it will be swapped with 257 Squadron’s bogie. The bogie from 257 Squadron will then be overhauled for fitting and use with Sidmouth.

34010’s trailing truck will be overhauled and made ready to use with the frames for the loco to be brought to Herston Works in the Summer.

When the weather improves preparation work can take place on Sidmouth’s frames. They have been grit blasted and primed at Sellindge but this was a number of years ago. The plan is to water blast them and priming again before they enter the Works.

If you want to donate to 34010 Sidmouth, please visit the Southern Locomotives Ltd website.

A new brake ejector is nearly complete for Manston and work has started on the cab fittings. Tyseley have promised to crack on with the overhaul of Manston, but are suffering some staff shortages (at the time of writing the update).

The retube has been delayed owing to staff sickness at Tyseley. Firstly welding work had to be completed in the boiler which was delayed because of Covid, and having completed that the NDT specialist has been delayed for the same reason again delaying retubing.

SLL hope that progress will now be made although Tyseley has advised that assistance will be required to complete the locomotive in time for the Summer season. The good news was that the centre cylinder is in much better condition than anticipated so will not need reboring, although a new piston is needed as well as new rings on the other pistons.

New cab fittings are being manufactured for Norman as some which were supplied by the Embsay & Bolton Abbey Railway were removed when the locomotive left the EBAR.

The cylinder block should be reinstated soon and when the axleboxes are completed, this will enable the engine to be rewheeled. A new smokebox is being fitted out and the smoketubes have been ordered.

There is still much work to do before the locomotive can be transferred to its new home on the Spa Valley railway.

257 Squadron was used on the Train of Lights in December, with the locomotive ‘top and tailing’ with U Class 31806. The loco only missed one service due to a small fault but was quickly fixed.

Donations for 257 Squadron can be made via the Southern Locomotives Ltd website.

With 80104 about to be withdrawn from service in May, Southern Locomotives Ltd have been giving a thought about how to prioritise resources. Priority has been given to Sidmouth due to an overwhelming number of shareholders contributing towards the locomotive. There is a possibility that the locomotive will have to go into store, but hopefully just for a short period of time.

Similarly to Sidmouth, the response from shareholders regarding 35025 has been positive, with many shares purchased specifically to sponsor this locomotive.

Work is taking place at Sellindge, with little cost at present, although this will most likely change.

New volunteer Peter Spowage admitted to SLL that he had a trailer, so many parts have been taken to a grit blaster near Canterbury. Currently, several cylinder and valves covers are awaiting collection, but the lockdown has currently prevented this from taking place. It is difficult to ascertain which parts are brand new from initial work undertaken at Loughborough 15 years ago, and which are original such is the finish.

Lots of plans and it is great to see more progress with a number of locomotives, and we cant wait to see what the future brings. The Great Central Railway has announced that they will be welcoming SR Battle of Britain No. 34072 257...