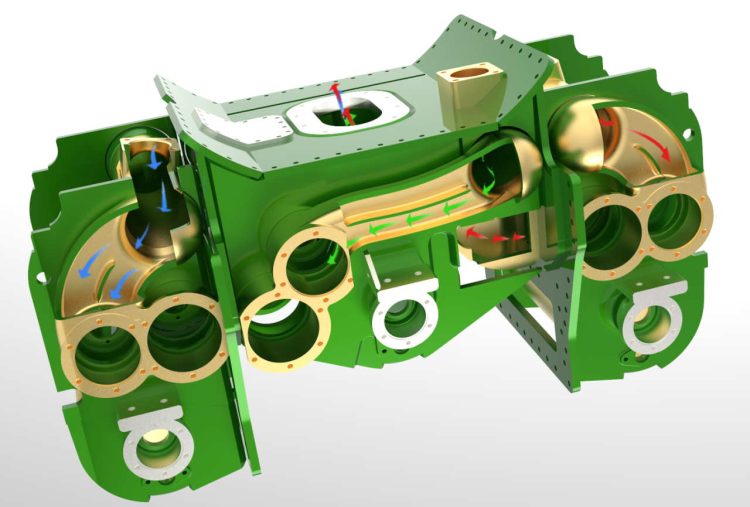 The P2 Steam Locomotive Company has announced that it has approached five companies to manufacture the fabricated cylinder blocks for P2 No. 2007 Prince of Wales with responses to its Request for Quotation for Construction expected anytime.

Additionally, as part of the design, Frewer & Co Engineers Ltd in Dorking, Surrey, will complete a Computational Fluid Dynamics analysis of the inlet and exhaust passages of the cylinder block.

When the redesign work was completed, David Elliott used a 3D printer to construct a scale model of the new cylinder block to help with the assembly of the actual cylinder blocks.

All companies approached have been given a 3D drawing of the modified cylinder blocks.

Graeme Bunker-James, Commercial Director, A1SLT, commented: “When considering the award of this key contract our decision-making criteria will focus on potential suppliers demonstrating previous experience of projects of this scale and complexity, their ability to manufacture to the specified tolerances & surface finishes, their capacity to deliver the project within the required timescales, the value for money of the proposal and the long term financial stability of the business. Along with the valve gear, the placing of the order for the cylinder block in April 2021 will be the last major hurdle to overcome in the construction of No. 2007 Prince of Wales.”

Ben McDonald, Group Director of Engineering, A1SLT, commented: “The commissioning of Frewer Engineering to undertake a Computational Fluid Dynamics analysis of the inlet and exhaust steam passages of the cylinder block is part of the continued application of modern techniques in the design and development of our improved class P2, completing the work of Sir Nigel Gresley from the 1930s.”

Mark Allatt, Trustee, A1SLT, commented: “We are delighted with the support the project to build Britain’s most powerful steam locomotive has received since its launch seven years ago. With over £3.4m spent and more than £3.8m donated to-date of the estimated £5m, we remain on-track for completion within three years. However, to maintain this progress we need to raise £700,000 per year and we are still seeking to recruit additional ‘P2 for the price of a pint of beer a week’ regular donors or covenantors. Once the cost of manufacture of the new cylinder block has been determined we will put in place an appropriate fundraising campaign.”