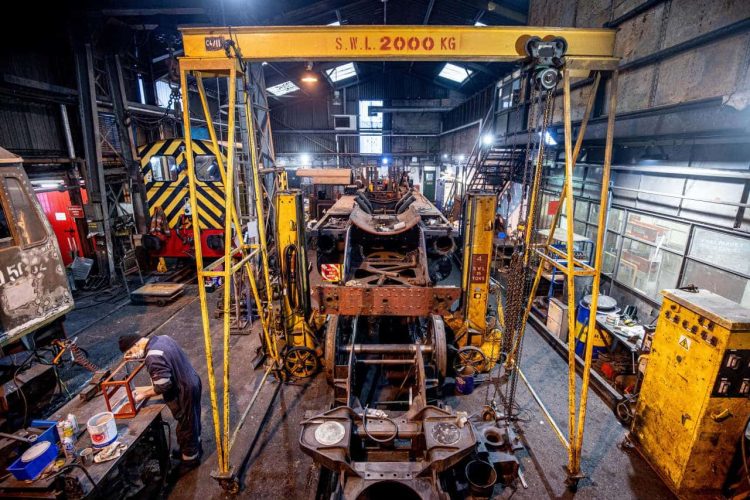 The North Yorkshire Moors Railway has released an update on the progress being made on a variety of diesel and steam locomotives.

Whilst the railway is closed to passengers, a team of 40+ engineers are completing the winter maintenance project.

Thanks to the Government’s £1.9m funding, part of the Culture Recovery Fund, staffs wages can continue to be paid.

The NYMR says that social distancing guidelines are in place, with smaller bubbles and separate areas with staggered start times.

44806, also known as Magpie, is currently undergoing a 10-year restoration. The boiler is currently away undergoing work at Riley & Sons in Bury, and whilst that is away, Andrew Jeffery and his team are currently working on the chassis, with the first part of the bogie overhaul completed as well as repairing the axle boxes.

The locomotive is expected to return to steam in 18 months time, returning to traffic in Spring / Summer 2023.

Steam locomotive 62005 to pass through Middlesbrough this Monday

James Newton and Phil Naylor are busy with 75029 in the boiler shop. A new copper tubeplate has been fitted alongside a new half copper door plate and half copper sides.

It is expected that 75029 The Green Knight will be back in service for Summer / Autumn 2022 after a chassis high bottom end overhaul.

Chassis work on 34101 has been completed, with work continuing on the boiler. A new firebox has been pressed, but 2,500 holes need to be drilled, reamed, and tapped ahead of the stays being installed.

The North Eastern Locomotive Preservation Group is completing a major overhaul of 63395 with the help of the North Yorkshire Moors Railway.

Most of the work being completed is on the chassis, with the boiler removed for overhaul and is currently ready to be steam tested.

The Bo-Bo diesel locomotive is undergoing a major restoration and is currently 2 years away from being completed.

A number of new bodywork panels are needed, along with an engine and bogie overhaul and complete rewire. The generator is away for overhaul, but the diesel team at the North Yorkshire Moors Railway is relatively small. Work on 5032 is being completed in between maintenance of those locomotives in traffic.

The essential winter maintenance continues alongside the major overhaul projects on a number of in-service locomotives:

Work on Repton has focussed on repairs to the super-heater header and a full set of elements. Other work on the locomotive has seen the cracked chimney welded.

825 was fresh from overhaul in 2019 and didn’t do many miles in 2020, so work on the locomotive has been basic maintenance.

Again, 29 was worked on not long before the pandemic, so is ready to go for the 2021 season.

The NELPG has been working on the J27 with new motion bushes, cylinders and other mechanical repairs.

The K1 has recently arrived from Carnforth and will undergo basic winter maintenance by the NELPG before returning to Scotland to haul The Jacobite services. However, Paul Middleton, aka Piglet, says, “we’ll hopefully see it run at the NYMR”.

The 9F only returned to service in September 2019, so only needs light maintenance to get it ready for service.

Winter maintenance from 2019 is approaching completion, with the riveting of a new horn guide progressing, but Piglet says that it will be ready just in time for the new season.

Lucie has been used recently to heat the carriage stock for the NYMR diners. Work here has included a boiler washout and will be ready for the spring.

Winter maintenance has been completed with the locomotive’s tyres due to be turned, which a date for this is being confirmed.

Little work being completed on 37264, which has seen new batteries fitted.

You can keep up with the latest news at Grosmont MPD by joining the Grosmont MPD News – The Original Facebook Group.

You can see a number of NYMR locomotives in action by purchasing a RailAdvent DVD set of the 2019 Annual Steam Gala.

Which is your favourite North Yorkshire Moors Railway locomotive? Let us know in the comments below! Paul Middleton, also known as Piglet, is the Head of Traction and Rolling Stock at the North Yorkshire...

CANCELLED – Where and when to see steam locomotive 62005 this Monday