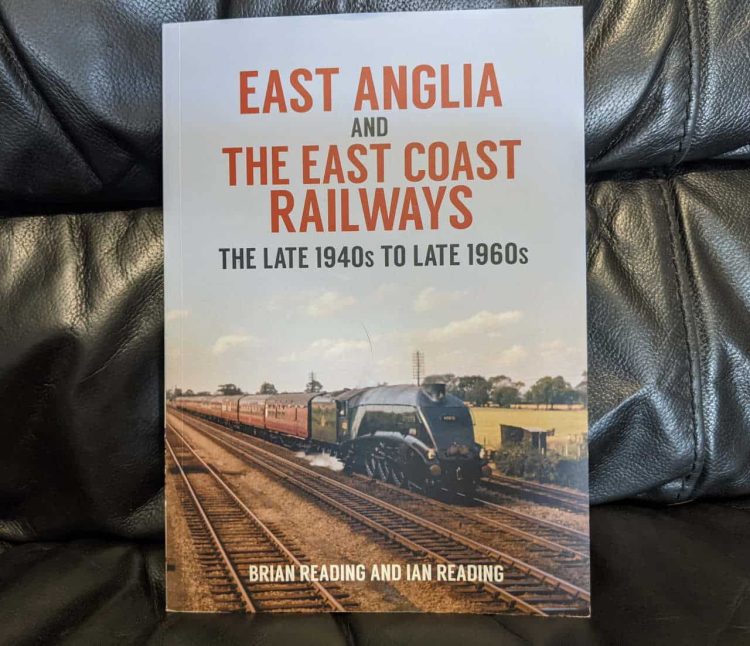 Recently released by authors Brian Reading and Ian Reading by publishers Amberley Books, this handy-sized book showcases what the railways were like post-war in East Anglia and on the East Coast Main Line.

This book is full of colour and black and white photos, in fact, the book is probably best seen as a photo book rather than a text rich book with a few pictures.

It’s great to see some well-known places and locomotives such as LNER A4s at York, but also seeing less well-known railways and photos, such as the train ferry at Harwich.

East Anglia and The East Coast Railways is only split into an Introduction and Book Content and isn’t split into chapters. For this specific book, I didn’t find this an issue due to the layout of the book, I actually preferred to flick open the book on any page and explore the photos, rather than reading from beginning to end.

Likewise, the book doesn’t feature any page numbers, but again, I found myself opening the book on any page rather than trying to find my current position.

Due to the nature of the layout of the book, the text is set to a minimum. Some may call the text more photo caption based, but I found it to give small amounts of information to find out more about the photo.

This then left enough space in the book for large enough photos so that, to me anyway, these actually told their own individual stories themselves.

What is nice to see is right at the start of the book is a map of the railways and shows where the photos were taken.

Whilst most of the photos are black and white, some are colour, but its great to see that all photos are sharp and clear with easy to read locomotive numbers and names.

To bring the review to an end, this book is a great handy size to take in your bag whilst retaining enough content for the price. It is a detailed and visual insight into what the railways in East Anglia and on the East Coast Main Line were like between the 1940s and 1960s. While page numbers would have been nice, this is a great addition to any bookshelf and we would recommend it to any steam fan.

The book is available to purchase from Amazon as well as from Amberley Publishing.