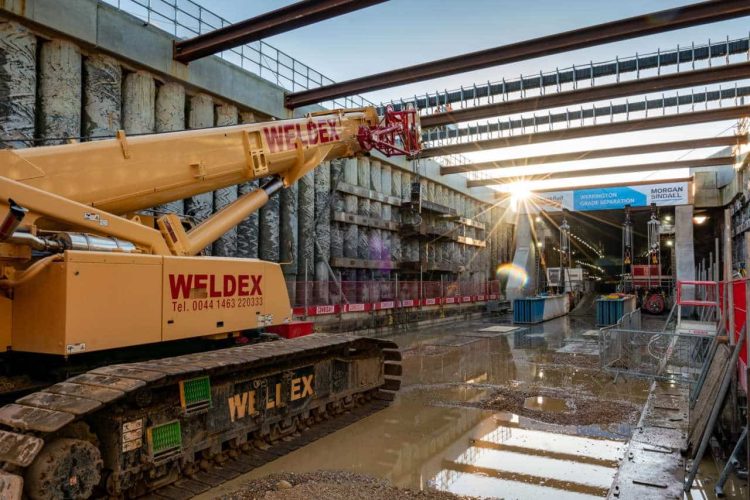 Following the news earlier this month about an 11,000-tonne tunnel being pushed into place, Network Rail has released time-lapse footage of the manoeuvre.

In a first for UK engineering, the tunnel was pushed under the East Coast Main Line near Peterborough at around 150cm per hour using hydraulic jacks.

The process took nine days to complete, but by using this method, it prevented hours of disruption to services on the East Coast line, which continued running throughout.

The tunnel, at Werrington, north of Peterborough will now allow slower freight trains to go underneath the East Coast Main Line and use an adjacent line northwards.

The work involved removing three of the tracks and overhead wires until the tunnel was underneath when everything was put back ready for regular services on the line.

Two new tracks will be installed into the tunnel along with the necessary signalling, and it should be in use by the end of 2021.

Meanwhile further south, work continues on the line in and around London King’s Cross, with no services running in or out of King’s Cross on the 30th and 31st of January.

Paul Rutter, Route Director for Network Rail’s East Coast Route, said: “Our teams have completed this challenging piece of engineering in a creative way, which also allowed a reduced train service to continue for those who still had to travel.”

“Over the nine days, we’ve made major progress on this vital project which will bring faster, more reliable journeys for passengers on the East Coast Main Line.”

“I’m so proud that this project has shown itself to be one which is industry leading and that our teams have had the opportunity to use this new technique for the first time in the UK on one of the country’s most famous railway lines.”

David Horne, LNER Managing Director, said: “This essential part of the East Coast Upgrade will allow faster, more frequent LNER services between London, the North of England and Scotland by creating a new and improved route for slower trains to cross the main line.”

“We look forward to working with Network Rail on the remaining East Coast Upgrade engineering works in the first half of this year, so that we can deliver the benefits for our customers and communities of this significant investment.”