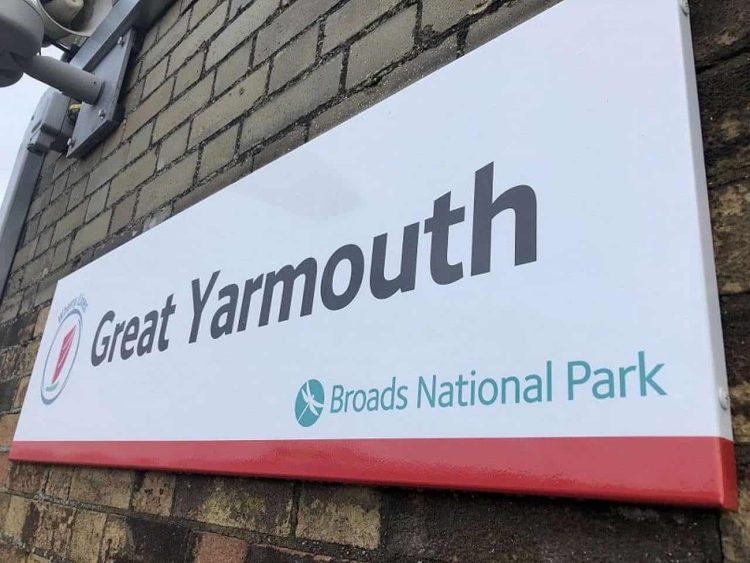 Greater Anglia has announced that eight of the stations they serve now have new signage featuring input from the Broads Authority and Wherry Lines Community Rail Partnership.

All of these are located along the Norwich to Great Yarmouth and Lowestoft Wherry Lines railway.

The aim is to increase awareness of the surrounding areas, hoping to boost tourism, being a nice update over the old signs.

This will be greatly aimed by phase two’s information boards, detailing points of interest, walking and cycling routes and history. This phase is due to start in the coming months.

“The Wherry Lines pass through two counties and a number of districts and parishes which traverse the Broads National Park. As the National Park was the common uniting feature of each route, it seemed appropriate to make it a central focus of the new signs, helping to promote tourism (when possible) and community engagement with the area.”

Chief Executive of the Broads Authority John Packman “Great Yarmouth is intrinsically linked with the Broads and it is fitting that this is recognised at the station.”

Greater Anglia’s Customer and Community Engagement Manager Alan Neville said “It’s great to get the message out there that these railway stations offer easy, car-free access to the Broads. Once we start to recover from the Covid-19 pandemic, I hope this will encourage more sustainable journeys to the area to help reduce the pollution and congestion caused by cars.

“Research shows that trains are the most environmentally friendly form of transport after cycling and walking, with greenhouse gas emissions per kilometre by rail being far less than cars. Our new trains are more efficient and produce less particulate pollution than our old ones which will help to make rail travel in East Anglia an even more environmentally friendly option.”

New research reveals that the building of a net-zero railway could bring 6,000 green jobs with employment potential...