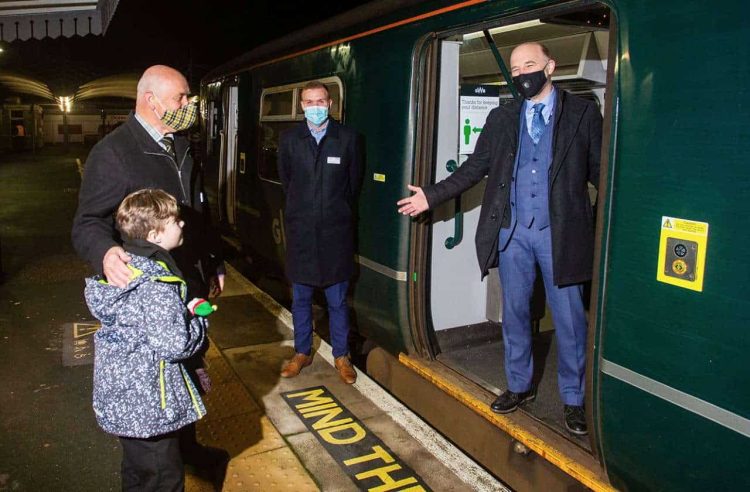 Leaving New Quay at 0712 the train travelled to Par, arriving at 0801 where Steve Double, MP for St Austell and Newquay, was there to welcome the train.

The increase in services from 12 to 16 gives passengers more choice when they can travel to destinations such as Plymouth and London, up to three hours earlier than before.

The new services will improve journey times for people along the branch making journeys to work, school and college easier.

Proposals are being developed by GWR, Cornwall Council and Network Rail, which, if funded, will invest more in track and signalling to improve services further as part of the longer-term Mid-Cornwall Metro vision aiming to link Newquay with St Austell, Truro and Falmouth.

Matthew Golton, Interim Managing Director for GWR said: “We are proud to have worked alongside MPs, Cornwall Council, rail user groups, and Network Rail to bring more services to the people of Cornwall and, in particular, to those who live along the Newquay branch line. With development funding recently being awarded by the DfT to look at the wider Mid Cornwall Metro aspirations, this is an exciting time for the people of Cornwall.”

Steve Double, MP for St Austell and Newquay said: “This new timetable is fantastic news for Newquay and will undoubtedly help residents connect for commuting to mainline stations in Cornwall and further afield.

“I have been in discussion with GWR and Network Rail for many months working to secure a better train service for Newquay and the villages on this branch line. This improved timetable is the first stage in a series of improvements for this route which will provide much better connections to and from Newquay.

“Along with the recently announced funding to progress the Mid-Cornwall Metro project, which will provide more services to and from Newquay, it is great to see this push to improve the rail connectivity for Newquay and stations along the branch line.”

Cllr Geoff Brown, Cabinet Member for Transport, Cornwall Council said: “This is a really exciting enhancement to the Newquay/Par branch line and for the first time in many years residents from Newquay will be able to commute to school or college in Plymouth, St Austell or Truro by rail and arrive by 9am. I am delighted that the great partnership working which has been established between GWR and Cornwall Council has led to yet another fantastic improvement in branch line services.

“Hopefully with the recent announcement of DfT funding to carry out further design work on the “Mid-Cornwall Metro” we may eventually see a coast to coast service linking four of Cornwall’s largest urban areas through a single route.”

Richard Burningham, Manager of the Devon & Cornwall Rail Partnership, said: “This is great news and there’s more to come. Together with Network Rail, GWR and Cornwall Council are also looking at further improvements to the line and have just been awarded development funding by the Government from the “Restoring Your Railway” Fund to develop the Mid Cornwall Metro which would see through trains linking Newquay with Par, St Austell, Truro and Falmouth.”

Christian Irwin, Industry Programme Director for the South West at Network Rail, said: “The additional services on the Atlantic Coast line to Newquay are going to be really beneficial for our local communities, businesses and tourists alike. The new services start the next phase of our commitment to unlocking further demand and improving train services across Cornwall by working with GWR, Cornwall Council and stakeholders. We are showing what can be achieved for passengers when we work closely together, and I look forward to building on this as the country starts to recover from the pandemic.”