Almost £5,000 raised for homeless through contactless donations at stations

1 in 53 Londoners are homeless 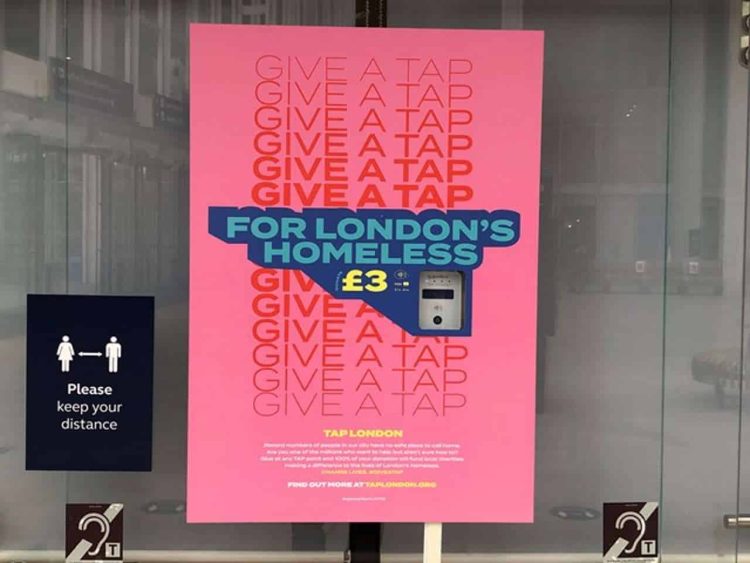 Almost £5,000 has been raised to help with the rise of homelessness in London following the installation of contactless donation points at Charing Cross and London Bridge railway stations.

The donation points were installed last year by Network Rail and TAP London and have seen around 1,500 people make donations.

TAP London are a non-profit organisation supporting a coalition of 29 charities including Shelter, Crisis, YMCA and a range of small local homelessness charities.

When the donation point is tapped, a £3 donation is taken and distributed to the charities. Over 90 donation points are around London, with London Bridge being the first railway station to have on installed.

In addition staff at Southern managed railway stations use an app called IRIS. The staff can use the app to record incidents involving homeless people and help them to refer them to Streetlink, who are a charity supporting those on the streets.

Around 170,000 people are homeless in London, meaning that 1 in 53 Londoners are without a home.

Polly Gilbert, Co-founder at TAP London said: “With hundreds of thousands of passengers passing through London Bridge and Charing Cross every day, our partnership with Network Rail has been vital in increasing awareness of the TAP London initiative.

“We are delighted to celebrate Network Rail passengers’ dedication to supporting London’s homeless, and grateful to the 1,500 who have stopped to tap their card.

“With the need greater now than ever before, we are proud to say that 100% of all funds raised will be spent locally, supporting Londoners who find themselves in hard times.”

Nicole Cohen-Wray, stations director for Network Rail Southern region, added: “Sadly, our stations are often seen as a place of safety for homeless people who are often looking for warmth, light and shelter. We are delighted to support initiatives that help to combat homelessness and proud to have hosted the first Tap London donation machines in our stations at London Bridge and Charing Cross.

“Our passengers have given generously, despite the pandemic, and will be pleased their donations have been used to help some of the most vulnerable people in our society. Donations have been used in a variety of ways, from providing safe rooms for young people, to skills training to help individuals back into work.

“We still have more to do, but passengers can help make a real difference to the lives of those who are homeless by ‘tapping’ when travelling through London Bridge and Charing Cross stations.”

David Wornham, Passenger Services Director for Southeastern, commented: “As a train company, we want to do everything we can to support the communities that we serve, so supporting contactless donation, especially when fewer of us are carrying cash during the current circumstances, is just one small way in which we can help raise funds for those who need it most.”

Chris Fowler, Customer Services Director for Southern and Gatwick Express, said: “I’m delighted that this fantastic initiative has been so successful, thanks to the generosity of rail passengers. It’s a great way to help people in need – very easy to give, and every last penny helps well-established charities to provide immediate support and longer-term care. Homelessness is a significant issue for society, and we are proud to be the first train company to have signed the rail industry’s homelessness charter, with the ambition to break the cycle of homelessness and end rough sleeping for good.”