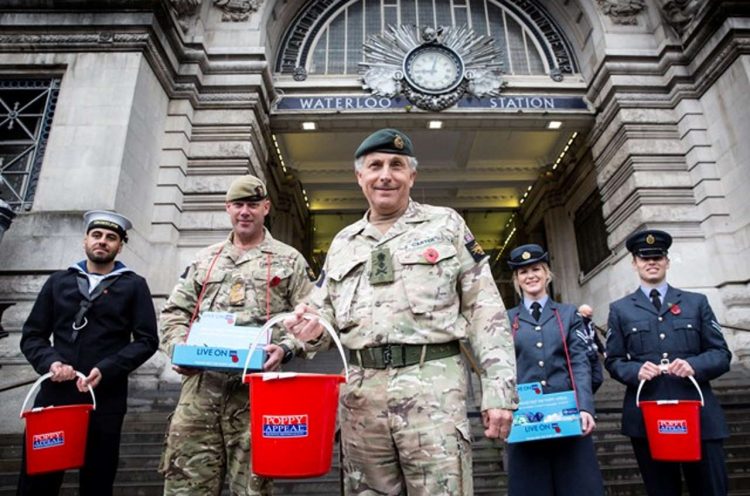 At London Waterloo, donations could be made by text to donate, contactless and through QR codes, ensuring those collecting and those giving could follow Coronavirus guidelines.

The Chief of the Defence Staff General Sir Nick Carter attended the event and spoke with volunteers, members of the Armed Forces and station staff, including station interface manager Barry Kitchener.

Barry said: “It was a privilege to introduce General Sir Nick to station staff at Waterloo.

“While it was very different event this year, the cause is one which is close to my heart and I hope lots of money is raised for the Poppy Appeal.”

“Our staff have played their part in ensuring key workers continued to get to their jobs and worked tirelessly to help passengers travel safe so it was an honour to explain to General Sir Nick how we have helped to keep the country moving.”

Claire Rowliffe, director of fundraising at the Royal British Legion said: “Whether you are travelling into London or working from home, please pick up a poppy from our collectors at Network Rail stations or visit The Royal British Legion website where there are all sorts of ways that people can take part remotely.

“The money we raise will support members of the Armed Forces community from all generations who are facing new hardships as a result of Covid-19 such as social isolation, financial difficulties and unemployment, losing loved ones or facing the threat of homelessness. That’s why this year every poppy counts.”

Rail operator Northern has run a mums and babies day out in South Yorkshire in a bid to...