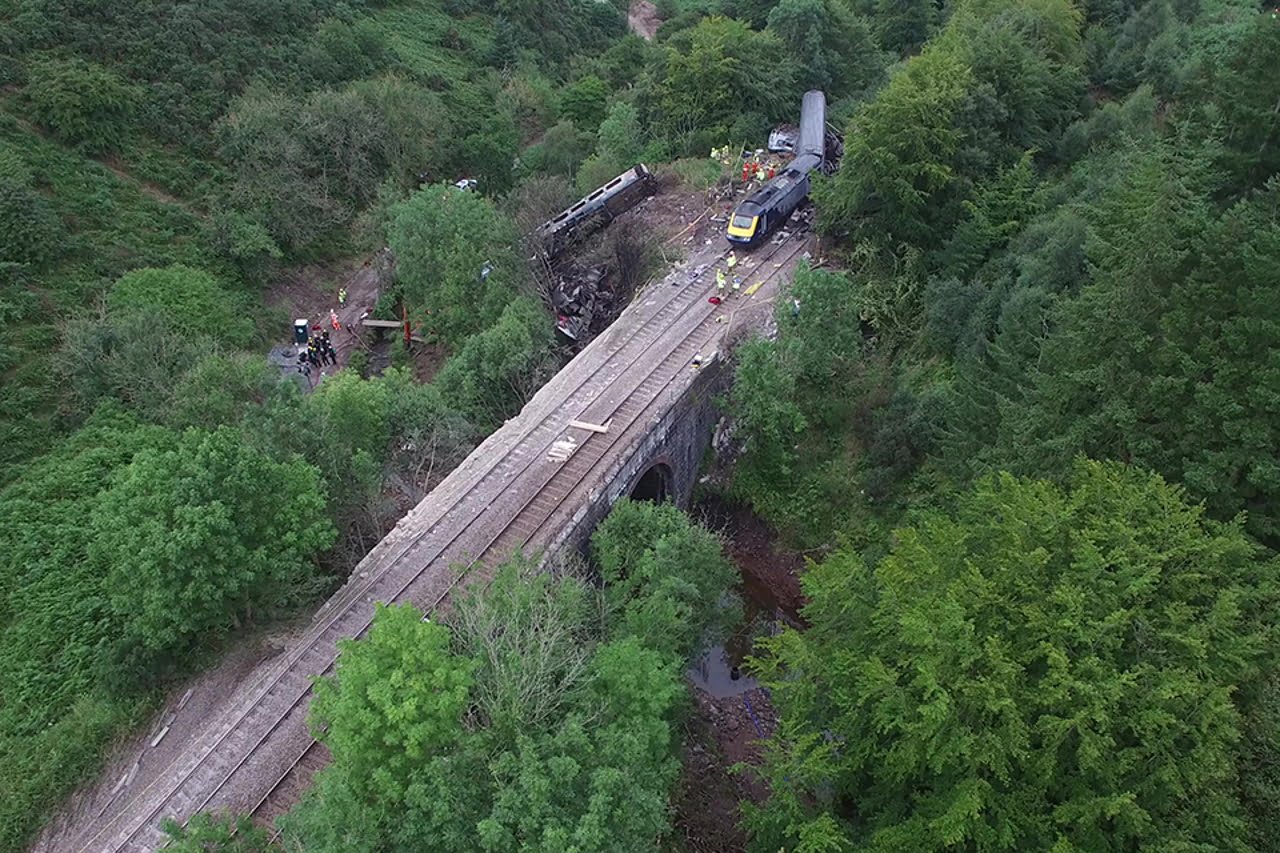 At around 9:40 on Wednesday 12th August 2020, all six vehicles from a ScotRail HST derailed after striking a landslip around 1.4 miles north-east of Carmont.

There were nine people on board the train at the time of the accident, three train crew (driver, conductor, and a train conductor travelling as a passenger) and six passengers.

Tragically, the driver, conductor and a passenger suffered fatal injuries in the accident. The remaining passengers and train crew member were taken to hospital.

The site of the accident is approximately four miles south-west of Stonehaven on the mainline which runs between Dundee and Aberdeen.

The HST was operated by Abellio (ScotRail) and had a leading power car, four carriages and a rear power car.

The train was operating 1T08 06:38 Aberdeen to Glasgow Queen Street. The train had departed both Aberdeen and Stonehaven on time, but had to stop at Carmont due to a northbound train reporting to the signaller that a landslide had occurred in front of 1T08.

It soon became apparent that 1T08 could not continue south, and the decision was made to return 1T08 to Aberdeen. The train was routed back over a crossover at Carmont and back onto the down line.

After travelling around 1.4 miles, the train struck a landslip on the down line, as the track curved to the right, the train continued straight and struck the bridge parapet (which was destroyed), the leading power car, and the third carriage fell from the railway and down the embankment off the bridge.

All wheelsets of the rear power car derailed but remained upright.

The RAIB is currently performing an extensive investigation and will release its findings in due course. Network Rail has also promised action after the accident (more information on that available here).

A fundraiser has been set up in memory of the train crew that have sadly died in the accident, more information on this can be found by clicking here.

The Office of Rail and Road has issued this statement: “Our thoughts remain with the families and friends of those who lost their lives and those impacted by yesterday’s tragic incident.

“Britain’s railways have an excellent safety record and incidents like yesterday are thankfully rare. There are increasing risks from extreme weather which are well known in the industry and our recent annual health and safety report showed that there have been six times more flooding events and a trebling of earthworks failures on Britain’s railways in the last year.

“We look forward to receiving the outcome of the review, in addition to plans from Network Rail responding to the requirement we set out last month for improvements to the monitoring of assets and more sophisticated responses to forecast adverse weather.”

Steam locomotive 46100 Royal Scot to pass through Ravenglass this Saturday The Rail Accident Investigation Branch has said it has launched an investigation after a Lumo train went three...