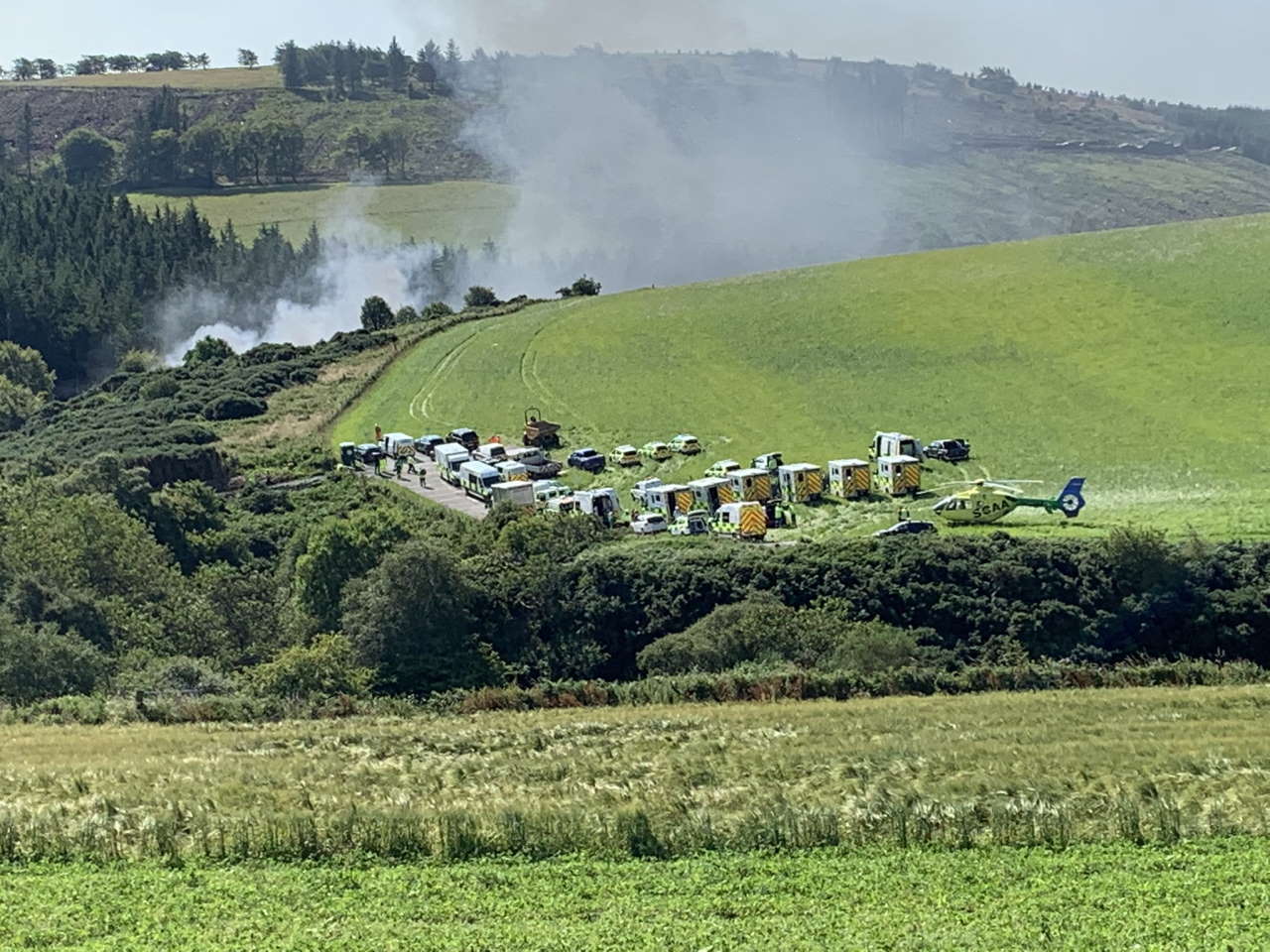 A ScotRail HST has derailed near Stonehaven, with serious injuries confirmed by SNP leader, Nicola Sturgeon.

A coach was on fire, with smoke visible in the valley.

The train involved was 1T08 0638 Aberdeen to Glasgow Queen Street. ScotRail has now confirmed that they are assisting emergency services with an ongoing incident

The British Transport Police has confirmed that they are in attendance to an ongoing incident, with three people now sadly being pronounced dead at the scene, with one of them believed to be the train driver.

The BTP say that officers were called to a train derailment at 9:43 am and remain there alongside Fire, Police and Ambulance.

Ben Philip has shared the following video showing Air Ambulance, Ambulance, Police and Fire in attendance, with smoke coming from the incident.

A major emergency service response to a train derailment near Stonehaven. An air ambulance is in attendance. A lot of smoke is coming out of the tree line where the railway track runs. Ambulances arriving by the minute. https://t.co/LcOYUnlF8m pic.twitter.com/rioaSUUN94

Here are the updates as they come in:

The British Transport Police has confirmed that 3 people have sadly died in this accident.

Formal identification has yet to take place, but the driver of the train is believed to be one of those that have died.

Six people have been taken to hospital to be treated for injuries, which are not believed to be serious.

Chief Superintendent Eddie Wylie said: “This is a tragic incident and first and foremost our thoughts are with the families and friends of those who have very sadly died this morning.

“We remain on scene alongside our emergency service colleagues, and a major incident operation has been underway. I would like to reassure the public that this was not a busy service, and from CCTV enquiries and witness statements we believe all passengers have been accounted for. However, once the area has been made safe then a full and thorough search will be conducted, which is likely to take some time.

“I know many people will understandably have questions, and we will be working closely alongside the Rail Accident Investigation Branch and the Office of Rail and Road to establish the full circumstances of how the train came to derail.”

The Scottish Fire and Rescue Service have released the following statement:

“We were alerted at 9.47 am on Wednesday, August 12 to reports of an incident involving a train near Stonehaven, Aberdeenshire. Operations Control mobilised 12 appliances and specialist resources to the scene as part of a multi-agency response. Crews presently remain in attendance.”

NHS Grampian has set up a Welcome Centre, and worried family and friends should phone 01224 319519

The first patient has arrived at Aberdeen Royal Infirmary, after help from the Coastguard Helicopter.

The RAIB has confirmed that the train involved consisted of 6 vehicles, which confirms that one of ScotRail’s Inter7city HSTs was involved.

Sky News are reporting that the driver has sadly died in the accident, and are also reporting a second fatality (according to the PA News Agency)

RAIB investigators are on route to the incident

Richard Clinnick has shared this picture, believed to be from the scene of the accident:

Seen this pic a lot. Wasn’t planning to share it, but I have been tagged a lot. Thoughts to all involved. https://t.co/GkbjRw3ghN

UK Prime Minister, Boris Johnson, has tweeted a statement regarding the incident

I am saddened to learn of the very serious incident in Aberdeenshire and my thoughts are with all of those affected. My thanks to the emergency services at the scene.

The following image has been shared on Twitter showing damage to a bridge, with a HST Powercar in shot

On First Minister Questions, Nicola Sturgeon has also confirmed that they are serious injuries:

“Although details are still emerging, I am afraid to say there are reports of serious injuries. My immediate thoughts are with those involved.”

“This is an extremely serious incident. I’ve had an initial report from Network Rail and the emergency services and am being kept updated. All my thoughts are with those involved.”

Grant Shapps has been briefed regarding this incident

Just met urgently with @networkrail for a briefing on Stonehaven derailment. British Transport Police & Network Rail are on location, along with rail workers who were nearby. The UK Government will provide every support. My thoughts are with those involved and their families.

“We are working alongside the emergency services to respond to an incident involving a train near Stonehaven. It is too early to confirm the exact nature and severity of the incident and more details will be made available once known.”

The RMT has issued a statement regarding the ongoing incident

Senior Assistant General Secretary Mick Lynch said: “RMT is aware of the major incident at Stonehaven and our reps are liaising directly at senior level with both ScotRail and Network Rail.

“Our priority at this time is to support our members, their colleagues and their families and to do all that we can to assist the rescue operation which RMT members are currently involved in.

“The facts behind this ‎incident will need to be established in due course but at this stage we are focussed on support and assistance and our thoughts are with all those impacted by this tragedy.”

Huge billowing black smoke from train on fire after derelailing near Stonehaven. pic.twitter.com/Rk01bS5RLI

Coastguard have now joined in the rescue operation

ScotRail has confirmed they are assisting emergency services with an ongoing incident.

We’re assisting the emergency services with an incident near Stonehaven and will provide more information when available.

Lots of emergency services heading to the incident

Some amount of sirens went up the back of my house in Stonehaven presumably to attend to this. Must have been upwards of 15 emergency vehicles.