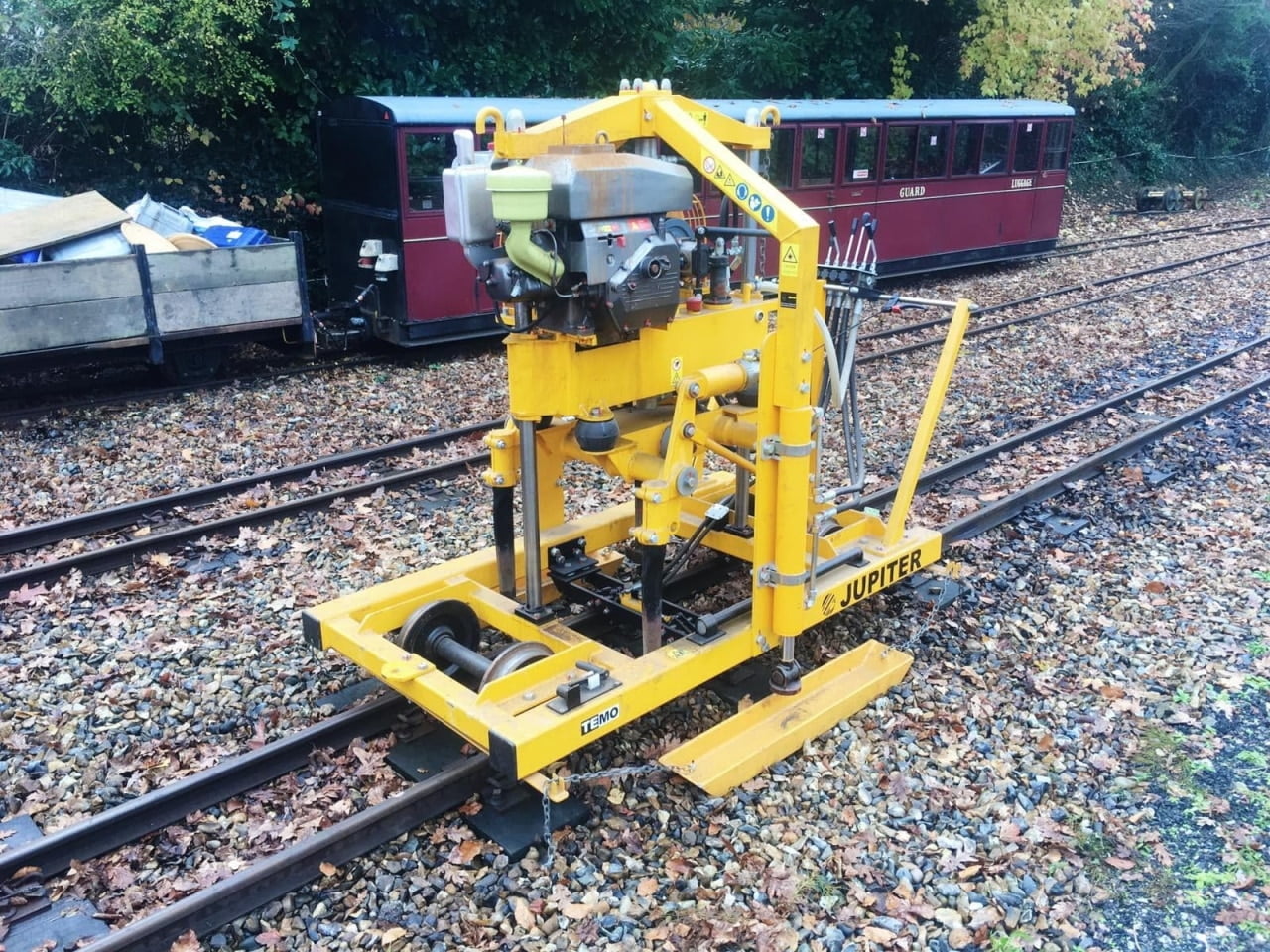 The bigger brother to the RLR's new tamper on the Bure Valley Railway
Credit: Neil Cooper

The Ruislip Lido Railway has announced that they are to welcome a new tamping machine to the railway.

A tamper packs in ballast under the railway sleepers to keep them in place as trains run over them.

Most railways similar in size to the 12″ Ruislip Lido Railway complete manual lifting and packing to the correct alignment.

However, using manual tools can be slow, noisy and physically demanding for those using the machinery. As seen on larger railways, such as the Ffestiniog Railway, tamping machines are used to speed up the process to deliver a more effective result at a quicker rate.

Tamping machines below 2ft gauge are rare, the Bure Valley Railway’s 2018 built tamping machine (pictured above) is the only known machine operating in this band. However, the Ruislip Lido Railway took steps in late 2019 to investigate the feasibility of acquiring a mechanised tamping machine.

Ruislip Lido Railway Society Director Chris Ladyman told RailAdvent the next stages in acquiring the tamper: “Upon sitting down to discuss the feasibility, we realised that for a not too significant sum we could have an extremely useful asset to add to our fleet, resulting in a significant reduction in manual labour for the PW team, huge productivity increases, and an improved track condition. We decided to set ourselves the ambitious challenge of purchasing our own tamping machine in 2020.

Streaming this Month on RailAdvent Plus – the Ruislip Lido Railway

Streaming this March on RailAdvent Plus – Ruislip Lido Railway

“Enquiries were made with a few different companies who were in the narrow gauge market and had dealt with similar machines before, albeit at 2ft gauge and above. The most promising line of enquiry was with the Bure Valley Railway, who very kindly allowed us to visit Aylsham in November 2019, to view and discuss their tamping machine.”

Having the opportunity to operate, investigate, measure and see the machine up close was invaluable, as well as being able to discuss the pros, cons and experiences so far with Andrew and Stuart of the BVR. The design and performance of the machine was hugely impressive as expected. I’d just like to place on record our thanks to BVR Managing Director Andrew Barnes for all his assistance throughout the project.

Following the visit contact was made with the Austrian company with whom the BVR developed their machine. They have proved an absolute pleasure to deal with and have shown themselves to be a real ‘can-do’ group. Without much delay we held detailed discussions on our specific requirements and exchanged a great deal of information, resulting in the first working drawing of our prospective machine being produced.”

Following final discussions and minor changes to the quote and contract, the expenditure for the machine was agreed by the RLRS board and contracts signed to give the go ahead very shortly after on January 23rd. Key components of the machine have unfortunately been delayed due to the coronavirus pandemic, but should be with us in the next few months.”

The BVR’s tamper is the second to be constructed by the Austrian company, the first is based on the Veinna Parkheisenbahn.

Some alterations have been made to the existing designs in order to fit the RLR’s loading gauge below 220mm from rail level, but thanks to some design work, an adapted design will be able to pass through and operate in all three platforms at Ruislip has been produced.

The RLR machine will be christened ‘Jupiter XN’, Jupiter is the name given to the tamping machine, and XN is because the RLR Tamping Machine is an eXtreme Narrow version.

The machine is not self-propelled, it will be towed to site, and moved by hand when in operation.

Chris added: “The tamper will be a huge asset to the railway – and is really a mark of how far we have come to be in a position to own and make use of such a specialist piece of equipment. We believe Jupiter XN will be the smallest mechanised tamper operating in the UK, and possibly the world.” The Ruislip Lido Railway has announced that their railway will be opening it's doors again from Monday 12th...