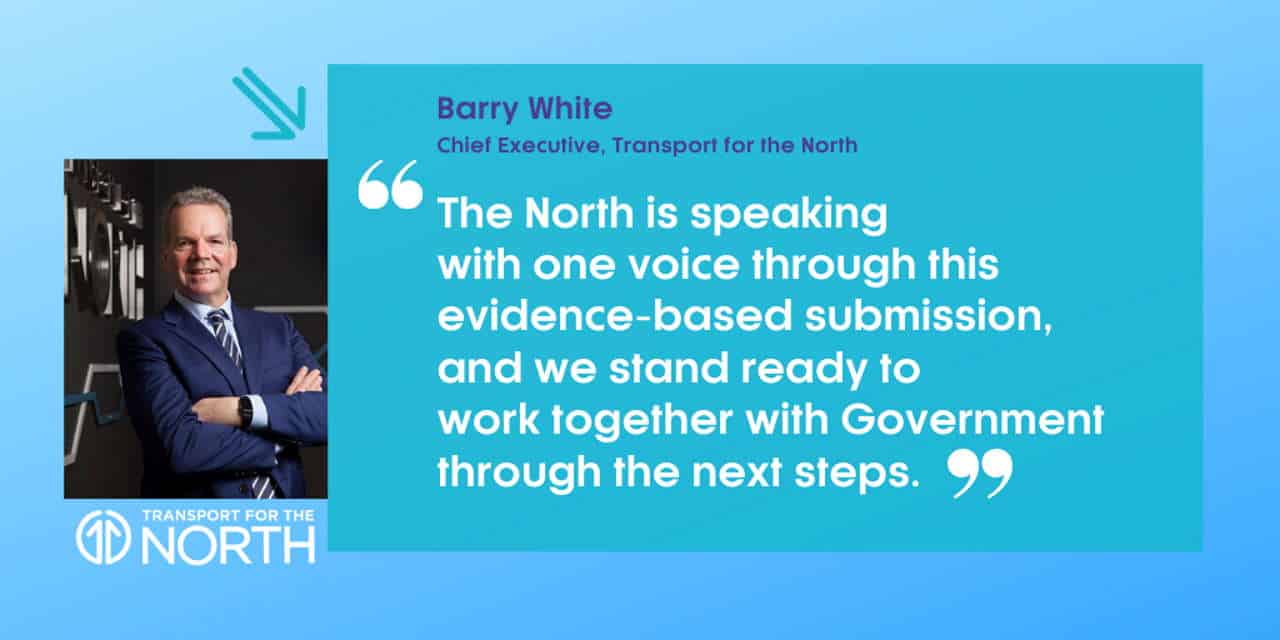 Transport for the North and its members have called for sustained investment to rail in the North through a commitment to ‘quick win’ projects.

A phased pipeline of 20 years of rail investment would support the North’s economic recovery from COVID-19.

In their joint submission to the Integrated Rail Plan, Transport for the North’s Members call for a sustained investment in the North’s rail network through a commitment to “quick win” projects and high-speed links.

TftN is making the case that the North needs projects such as Northern Powerhouse Rail and HS2 to be completed as well as local improvements to the rail network.

Speaking on the release of the submission, Barry White, Transport for the North’s Chief Executive, said: “We’ve strongly welcomed the Government’s passion for infrastructure investment in the North, and commitment to projects like HS2 and Northern Powerhouse Rail. It’s an agenda the North set. But there’s no point in doing it piecemeal. Now, more than ever, the North needs certainty on what rail schemes will happen and when, so that passengers and businesses can benefit as soon as possible.

“We need an integrated and sustained 20-year pipeline of investment in our rail network. It’ll be a vital weapon to combat the COVID-19 economic shock and to secure a greener future. Better rail infrastructure could get people and the economy moving and, in the long-term, support a period of growth that creates more opportunities.

“We’ve been clear that tackling rail problems in the here and now – by committing to projects around some of the congested parts of the North’s network – need to be considered by the Government and then progressed at pace. But we also need to explore how to speed up delivery of key parts of HS2 and Northern Powerhouse Rail in the North to ensure people aren’t waiting decades for change. We must deliver on the well-worn promise that change is coming down the track.

“Our Members are clear on what interventions are needed, and that – as a formidable joint voice for the North – they should have a strong role in the decisions and the delivery of such rail schemes. The North is speaking with one voice through this evidence-based submission, and we stand ready to work together with Government through the next steps.”

Among Transport for the North’s initial evidence is the need to:

Cllr Judith Blake, Leeds City Council and West Yorkshire Combined Authority said “The Government’s Integrated Rail Plan must commit to delivering Northern Powerhouse Rail alongside the eastern leg of HS2 and the full TransPennine Route Upgrade, so the North can benefit from increased capacity and connectivity, and to support our economic recovery from the COVID-19 pandemic. At the same time it is also vitally important that investment in the strategic rail network is realised, so the North receives a truly integrated service from which our towns and cities can enjoy the benefits much earlier.”

Tees Valley Mayor, Ben Houchen said: “This submission highlights the need for large-scale transport initiatives, including Northern Powerhouse Rail, but also emphasises that investment for crucial local and regional improvements should not be overlooked. “There is a need for a rail network that truly serves the whole of the North, and isn’t just focused on the big cities. Good progress is already being made on the redevelopment of Darlington Station and there is a real opportunity to deliver a Northern Powerhouse Rail ready station as a “quick win” in this programme and enhance vital connectivity to and from the town in a truly pan-northern way.

“As well as local improvements to help us increase capacity and make travel even quicker, more reliable and comfortable for those local people I represent, a focus on enhancing rail freight capacity will be central to recovery following the coronavirus pandemic. In the Tees Valley, improvements between Teesport and Northallerton will further drive our regeneration ambitions and support my calls for a Freeport, bringing with it an unparalleled economic boost to our region and the wider North.”

“North Yorkshire County Council strongly supports the aims and aspirations of Transport for the North set out in its submission to the Integrated Rail Plan Review. These are closely aligned to the top priorities contained in the County Council’s Strategic Transport Prospectus and current Local Transport Plan: improving east-west transport connections, better access to high-speed and conventional rail services, and upgrading the East Coast Main Line to the benefit of longer distance rail journeys to the north and south. As England’s largest county with key strategic geographic significance, North Yorkshire is ready to play its part in backing Transport for the North in its efforts to create a modern and efficient rail network in the north, which has sufficient capacity, which is more reliable, and more affordable for our residents.”

Deputy leader of City of York Council and Executive Member for Transport, Cllr Andy D’Agorne said: “City of York Council supports Transport for the North’s aspiration to secure an integrated pipeline of rail improvements which will deliver the major planned programmes through an upgrade of the existing network to deliver Northern Powerhouse Rail, a transformed East Coast Main Line and other new rail infrastructure across the North, to bring benefits for both passengers and rail freight.

“City of York welcomes the TfN identification of and potential for early delivery of infrastructure schemes on the Leeds – Newcastle section of line. The current work by City of York for a new station at Haxby as part of its bid to the Department of Transports – New Stations Fund – 3, if successful would be an early win, as part of the development of an Integrated Rail Plan for the North and any Economic Recovery Plan.” 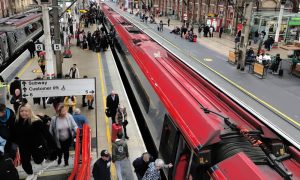 Steve Rotheram, Metro Mayor of the Liverpool City Region said “The government’s Integrated Rail Plan must commit to both long-term infrastructure projects and immediate local and regional improvements. We know that both will be needed as we look to rebuild our economies in the post-COVID-19 world. The Liverpool City Region needs to be connected to Northern Powerhouse Rail and HS2 with a new twin-track rail line linking Liverpool and Manchester and a new city centre station, as well as improvements to the freight network to relieve congestion and better service our port.”

Dan Jarvis, Mayor of the Sheffield City Region said: “This submission highlights the need for large-scale transport investment right across the North, but also emphasises the need for crucial local and regional improvements. In South Yorkshire, we have a number of shovel-ready projects which will help spur economic recovery and renewal after the coronavirus pandemic.

“The Hope Valley Line provides the only Trans-Pennine rail link between South Yorkshire and Greater Manchester, performing a vital role in our economy and the wider northern transport network. Passengers travelling between Sheffield and Manchester have been forced to endure endless delays, cancellations and unreliable services for far too long. In the 21st century it should not take between 50 and 55 minutes to travel the 40 miles between Sheffield and Manchester.

The signalling system at Bridlington is being upgraded with an electronic control panel and colour lights.