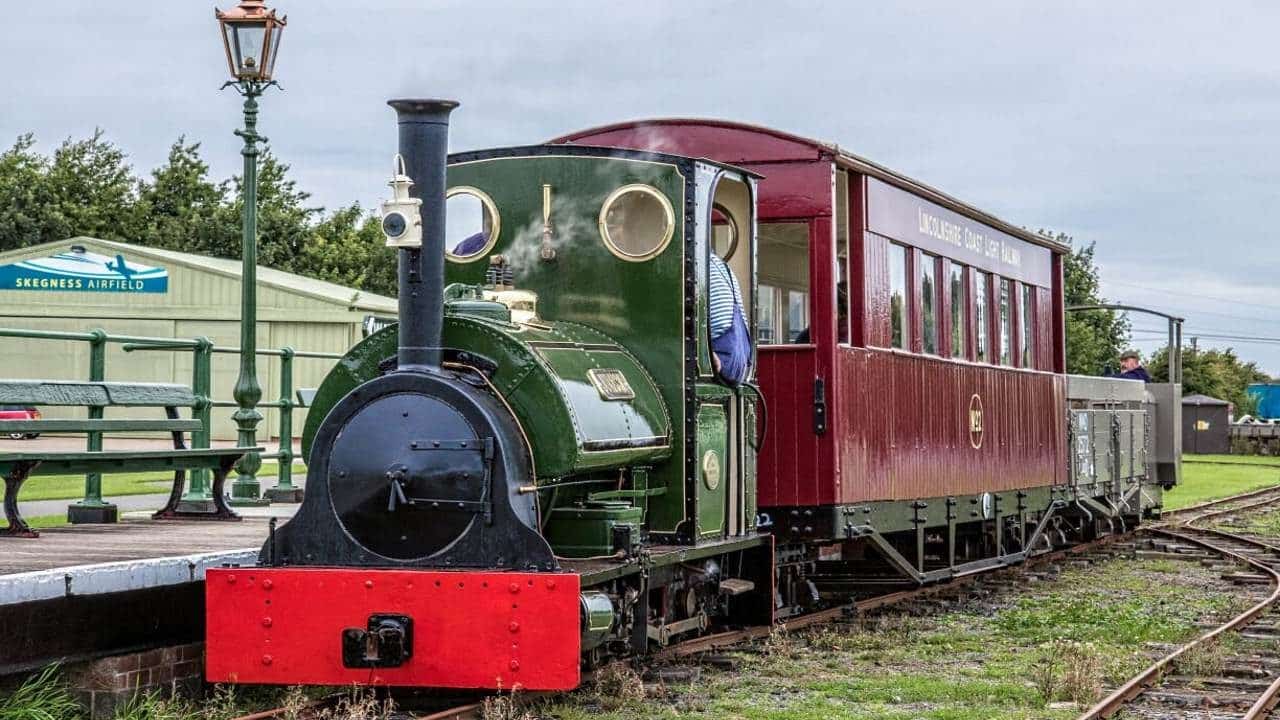 The Lincolnshire Coast Light Railway has announced that their tenth-anniversary celebrations of the reopening of the railway in Skegness Water Leisure Park have been shortlisted for the Heritage Railway Association’s 2020 Awards.

It is the second year running in which the LCLR has been shortlisted for an award.

The other railways short-listed in the Small Groups section are the Deeside Railway; the Ferryhill Heritage Trust and the West Lancashire Light Railway for securing the future of their line.

“We involved as much of Skegness and the coast’s holiday industry as we could in our celebrations – so this short-listing is as much an honour for the community of Skegness and District as it is for the Railway.

“For instance, the Mayor of Skegness (Cllr. Mark Dannatt) – helped by The Jolly Fisherman – waved off the anniversary train with a giant green flag and outsize tickets, after loading an iced wooden ‘cake’ made by a student from Horncastle, Millie Waby, from a chunk of old railway sleeper into the firebox of our steam engine, Jurassic.

“Hotels, caravan parks, museums, businesses around the area – and especially our neighbours, Butlins, handed out leaflets telling visitors when they could ride ‘Jurassic in the Park’ – the slogan we adopted to publicise our trains. We doubled the number of passengers and helped raise thousands of pounds for local charities with the Railway’s involvement in the Skegness Classic Wheels Show, at the end of the operating season”.

“Now in 2020 we will be celebrating the 60th anniversary of the opening of the Lincolnshire Coast Light Railway. It was a world first – worth emphasising that this was the first time a group of enthusiasts had built a heritage railway on a greenfield site anywhere in the world. The second such line, the Ocean Beach Railway, opened at Dunedin in New Zealand three years later. So while two or three existing railways had been reopened or taken over by enthusiasts 60 years ago, it was here in Lincolnshire that the LCLR  became the first railway in the whole world to be built and operated by  enthusiasts.

“It ran successfully for 25 years and carried more than two million passengers before changing holiday patterns brought about its closure. After some years in store at Burgh-le-Marsh, it moved to Skegness Water Leisure Park at Ingoldmells when that was being developed. This year will also be the 25th anniversary of the opening of the Park and the 20th anniversary of the first flights from and to the Skegness Aerodrome, which is next to the LCLR.

“Quite a year for the railway, the Park and the Aerodrome and everyone in Skegness and District whose support and dedication makes it possible”.

“one of the most  popular attractions on the Lincolnshire Coast”. In 2019 the magazine Heritage Railway listed the LCLR among Britain’s Top 20 Seaside Railways and it was The Railway Magazine which coined the description “The Lazarus Line” to describe the LCLR’s transformation from dismantling and storage, to an award-winning line, showcasing the railway history of the First World War battlefields, and Lincolnshire’s narrow gauge lines, to the point where it was honoured by a visit from HRH The Princess Royal.