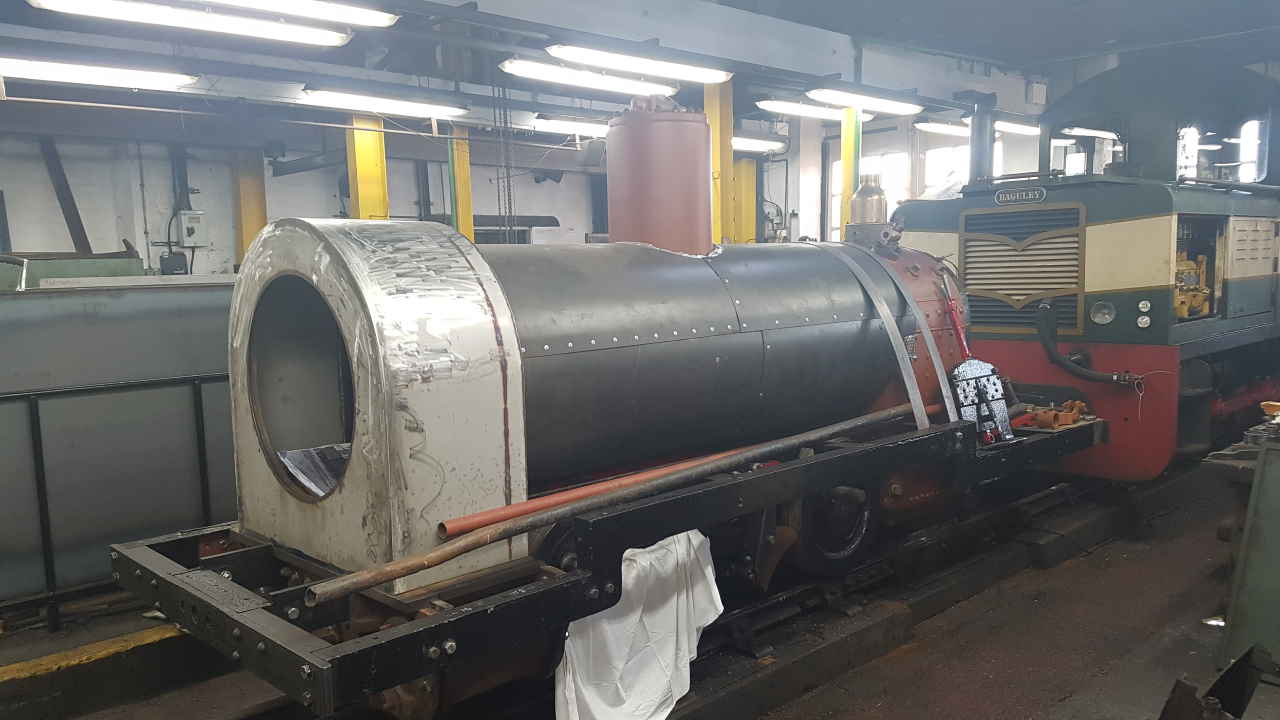 Back in 2013, the Ffestiniog Railway Company announced that it would be restoring George England 0-4-0ST Welsh Pony back to traffic.

The locomotive was originally built in 1867 and has been overhauled and rebuilt many times before it was withdrawn in 1940 – by this time it was carrying a life expired third boiler and a tired second set of main frames.

Welsh Pony was always earmarked to be the next in the queue in the ’50s and ’60s – however, the George England never quite made it to the front of the queue. In the 1980s therefore, it was placed on a plinth outside Harbour Station in Porthmadog.

For many years, the FR Co. said they had no plans to return Welsh Pony back to traffic, preferring to keep it as a museum piece in its withdrawn condition. However, Welsh Pony did not fare well on the plinth, being attacked by the salt-laden sea air.

After removal from the plinth, the locomotive was often found outside due to the limited shed space – hardly something you’d expect for a locomotive originally built for the Ffestiniog Railway!

Dismantling of the locomotive took place during the 150 years of steam event on the Ffestiniog Railway. Now, fast-forwarding six years to 2019 – the restoration is now nearly complete.

When dismantling the locomotive, the enormous task of the this restoration became apparent to the team. Many wheelbarrows of rust and dust simply just fell of the locomotive when parts were removed.

It was hoped, however, that one of three major components, the boiler, frames or cylinders would be reusable. However, all were well beyond restoration and have been stored for future display.

New frames, cylinders and a boiler were built early on in the project along with a replica tender and the original tender was paired with Welsh Pony’s unrestored sister, Princess.

This additional work meant the funds originally raised for the project were spent quickly. After several years of no work whilst more funds were raised, it was found rather difficult to find space and manpower to continue working on the locomotive.

Even as recently as summer 2018, the Ffestiniog Railway were finding problems in this respect. A planned window of three months in the works was hindered when one of the railway’s P-Way (Permanent Way) diesels suffered a major failure – taking the place of Welsh Pony in Boston Lodge’s workshop.

Now, however, with the help of a volunteer team, Welsh Pony is progressing once again. New rods for the locomotive have been completed and fitted to the locomotive in the last month and polished last week ready for final fitting. The drag boxes and footplate framing have advanced well and now the works paid staff have fitted the new stainless steel smokebox. Welsh Pony’s main steam pipes have been restored and the boiler cladding is being fitted.

There is a new chimney in progress along with a new smokebox door. The previously restored saddle tank, which is now over a hundred years old will be given some fettling before a test fitting in December.

A number of original fittings have been returned to the locomotive which had been stored in a safe place.

In a golden find, a pair of clacks dating back to 1903 was found in a heritage store. These heavy fittings had been removed from one of the original Ffestiniog Railway locomotives at some stage, many moons ago. It was expected that new clacks would be needed and indeed patterns were made – no one was aware that these clacks existed. They were only revealed by chance when another item was moved for photography and
were spotted by someone who instantly recognised them.

The clanks were restored within weeks and fitted with new valve heads – they are now ready to be fitted to the locomotive for its next period in service.

The loco has now spent 80 years awaiting its next turn in service. This is eight years longer than what the locomotive was originally in service for.

The locomotive will be outshopped for testing in the deep plum livery carried by the Ffestiniog heritage carriages. Once a proven locomotive, it will be painted in green in honour of Allan Garraway, the first GM of the restored Ffestiniog Railway. Mr Garraway had made the first donation to the Welsh Pony fund in 2013.