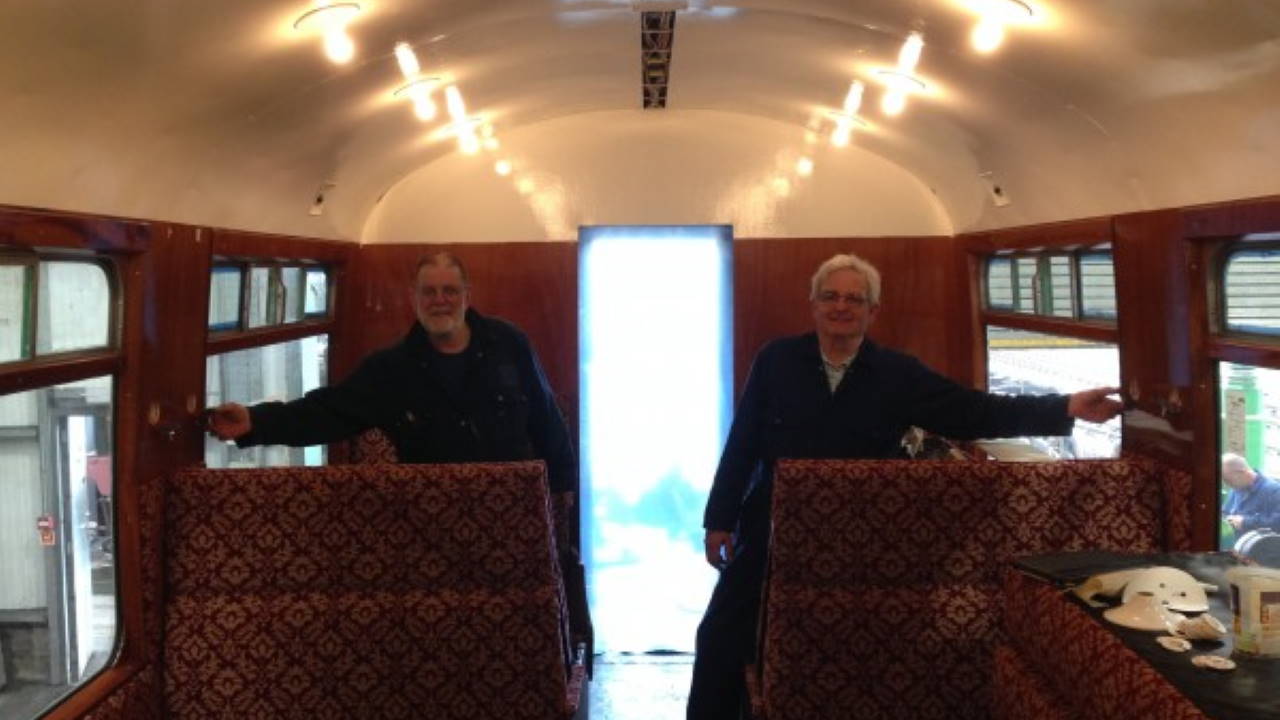 The big news this month is the completion of the electrical system for Bulleid open third, 1456.

Graham and Norman, who have been their friendly parish sparks, were able to connect everything up for the first time due to the completion of other works.

It was an amazing sight to see the carriage illuminated with almost a full complement of light bulbs.

The warm glow emanated from the country end saloon which was completed first (they originally didn’t have enough bulbs on hand to do both ends at the same time!) gave another one of those great moments which showed the carriage moving towards completion.

They were able to put in the final bits of the electrical system for the carriage as most of the structure of the toilet compartments had already been reinstalled.

The cupboard that forms part of the north side toilet bulkhead, is now acting as the main electricity control cupboard.

This is what allowed Graham and Norman to install the main switches and fire up the lights for the first time.

The installation of the toilet compartments has been a long process, as it was established last week largely due to the number of components which required painting.

Now they are all painted and are almost all in place.

The next parts to be placed in the country end sliding doors, which are abnormal as they will be two narrower doors instead of one big single door, they will have nice newly chromed fittings going on them, which look spectacular and very shiny.

In a move which may well confuse a few people, they have actually removed all of the exterior doors from the carriage!

They stayed on a while longer than expected, but removing them was always part of the plan.

The doors were quite heavy, so it was decided that it would be an easier job to manoeuvre them into the correct position without all of the “dressing” on them, such as timber work and glass.

They completed this test fit just in time for Christmas, and really only left them on for the February steam gala.

They intended to remove them fairly quickly to be dressed on the bench, before going back in the positions prepared for them, but it just never quite happened.

Having now been removed, Gordon has been busy making the new panel work and fitting refurbished locks, while some of our dedicated volunteers have been cleaning up the window mechanisms and painting areas which later on in the work won’t be accessible.

This is a thing such as where the rubber which holds the typical Bulleid style lozenge-shaped window at the top of the doors.

Regarding other work about the place, Gordon has been busy putting on the gangway bellows on each end, which almost completes the ends.

He has installed the toilet windows, which included the toplights, which also completes the glazing, except the sliders that is.

Also created was the backing plates for the carriage light switches, which they have designed and made out of black and white three-ply plastic. This was routered to shape, but the tiny bits of routered detritus from the plastic seemed to get everywhere and stick to everything.

Last but not least, they have taken delivery of the new luggage rack castings, which took a lot of perseverance to get made, but with some final touch-ups, the carriage will look complete.