Southern Locomotives Ltd (SLL) has been busy the past three months repairing and restoring their fleet of engines based at the Swanage Railway.

SLL is excited to announce that “Sidmouth” will enter Herston Works after an agreement was made with the Swanage Railway.

Currently, 34010’s frame is stored on a rail wagon near Norden on the Swanage Railway. Initial plans are for the frame to be brought down to Norden for cleaning in a couple of months, ready for moving into Herston Works in Early 2020.

Work is in progress on cleaning and painting the bogie and trailing truck.

At Herston Works, work has continued on fitting 34028’s new smokebox. The team are currently marking up sections of the barrel to cut out for steam pipes, chimney etc. The boiler nears the end of its overhaul, with the superheater recently joining it for fitting and testing. In the event the boiler is completed before the frame is ready to receive it, which is likely, the boiler will be stored at a private site near Swanage.

With the wheelsets removed, assessments could be done on the axleboxes. This has shown all six need repair work.

New crowns are ready for fitting but a busy wheel lathe puts further work on hold. To gain a good outcome from this downtime out of traffic, the team plan to clean and overhaul the bogie and trailing truck. This will reduce the amount of work needed at 34053’s 10-year overhaul in 2022. 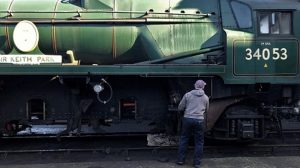 Repair work on “Manston” is now complete. For now, the engine will be stored at Tyseley with time and finances focused on 34028 and 34053 at present. When attention turns back to 34070, work will first commence on the axleboxes.

“257 Squadron” has been busy hauling trains along the Swanage Railway so far in 2019. Apart from an issue with the valve packings, there have been no problems in running. In March, the engine starred in a photo charter.

The cylinders have been relined and bored and the coupled wheels are heading for the South Devon Railway for profiling of the current tyres. Further examination has shown the axleboxes need more work than first anticipated, with the boiler’s first assessments due soon.

Steam locomotive 45596 Bahamas on tour heading through Skipton this Saturday