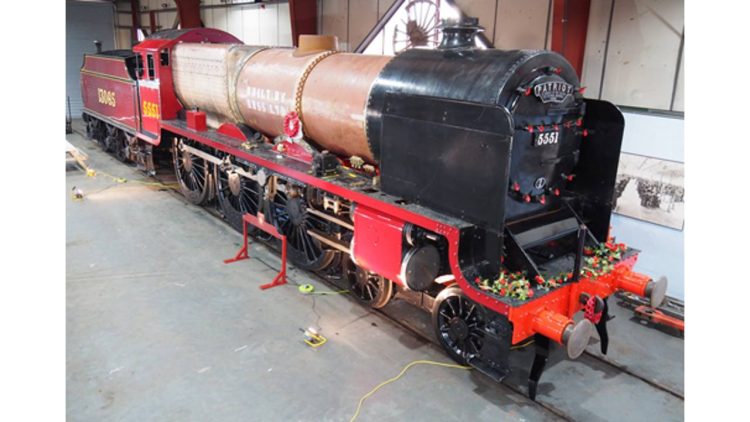 Simon Weston CBE has unveiled a crest on the new National Memorial engine this weekend at an event at the Crewe Heritage Centre.

The event was held on the 10th November to commemorate the centenary of the Armistice.

The new build steam locomotive ‘The Unknown Warrior’ is being built to commemorate all those who fought and died in conflicts since the Great War.

Simon Weston CBE was welcomed at Crewe Heritage Centre by Her Majesty’s Lord-Lieutenant of Staffordshire Mr Ian Dudson, CBE KStJ and David Bradshaw, who is Chairman of the LMS-Patriot Project.

5551 ‘The Unknown Warrior’ was moved to Crewe Heritage Centre for its boiler to be trial fitted by Heritage Boiler Steam Services.

Freightliner class 66 ‘PATRIOT’ was specially brought to Crewe for display at the naming event.

Welsh Guardsman Simon Weston suffered horrific injuries in the 1982 Falklands Conflict when the ‘Sir Galahad’ (the boat he was on) was attacked.

“I am truly humbled to be asked to be invited to unveil the crest on ‘The Unknown Warrior’. It is a magnificent achievement by all those involved in creating this ‘beast’ of a locomotive that will be a lasting memorial”.

“We are honoured that Simon Weston CBE has unveiled a crest on the new national memorial engine ‘The Unknown Warrior’. As a serving soldier himself, his bravery and courageousness in the line of duty is exemplified by all those who fought for their country”.

Warning from Network Rail ahead of West Midlands electrification