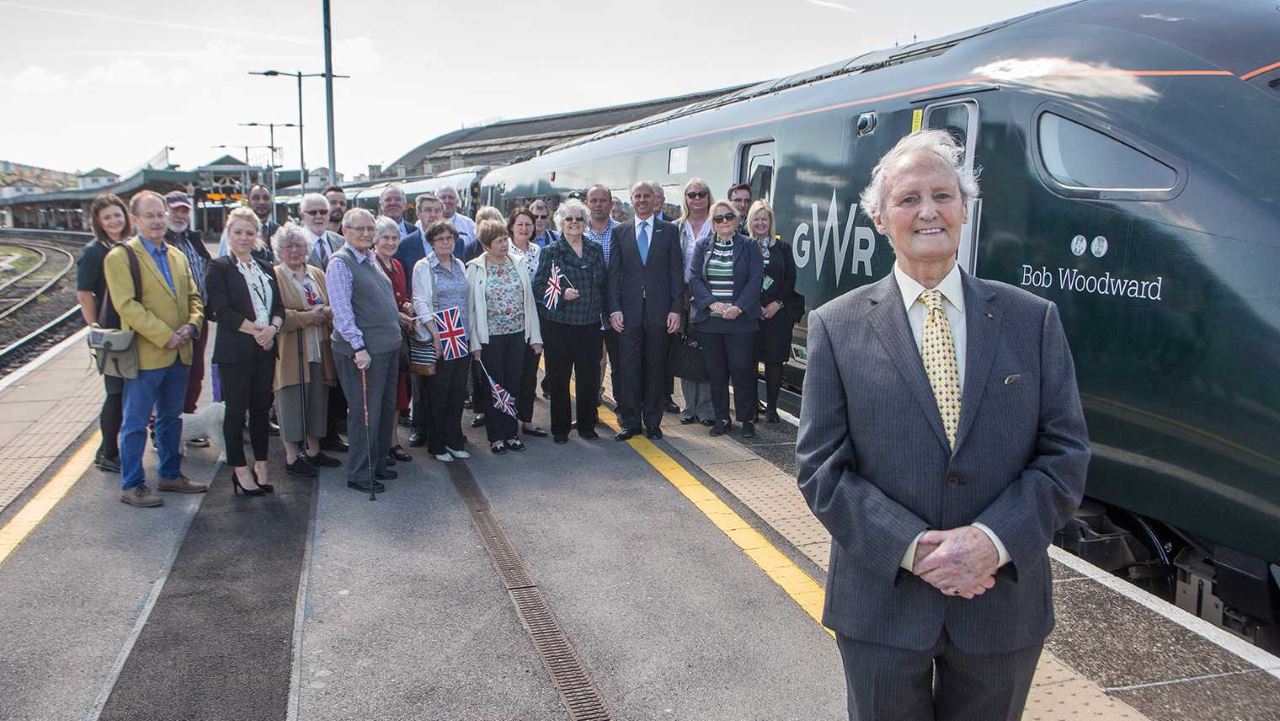 Great Western Railway has paid tribute to Bristolians Bob Woodward and Elizabeth Ralph by naming one of their new Intercity Express Trains after the pair.

Bob Woodward is the founder of the children’s charity, CLIC, and was present with his family at Bristol Temple Meads railway station to see his name applied to Intercity Express Train, 800020.

Mr Woodward is a successful property developer. His life changed in 1974 when his eight-year-old son Robert was diagnosed with cancer. Seeing the minimal options, he created a setting where families could be together whilst their child is treated for the illness. As a result, CLIC was born.

Miss Ralph was a city archivist to Bristol City Council for more than three decades. She was praised for her organisation. Miss Ralph also became the first female chairman of the Council of the Society of Archivists and general secretary of the Bristol and Gloucestershire Archaeological Society.

GWRs new Intercity Express Trains entered service in October 2017 and have been named after individuals and organisations that have inspired the regions that they serve – 50 of which will be taken from the 100 Great Westerners list.

To date, the new trains have completed over a million miles in passenger service.

“I feel extremely proud and humbled to have been nominated as one of GWR’s 100 Great Westerners. It is an added thrill and something I could never have imagined, that a gleaming new engine will be called after me!

“Whilst it is my personal name that will feature, I am conscious of the enormous input of so many into the creation of the CLIC trust over 40 years ago which has gone on to become the largest children’s cancer charity in the UK, and of the work of the wonderful Starfish Trust where I have been fortunate enough to spend many happy years supporting children with disabilities.”

“Elizabeth Ralph served as City Archivist in Bristol for over three decades. At the start of her career, she worked to protect Bristol’s historic records from bombing during the Blitz.

“In the years that followed, she preserved records of many Bristol institutions and became well known and respected as both an archivist and a scholar. We’re proud to continue Miss Ralph’s work at Bristol Archives and delighted that she has received this honour.”

“I am delighted that we can honour both Bob and Elizabeth with this train naming, two heroes of Bristol that helped shape and define the local area.

“Bob has been a genuine hero of charity work, raising over a £100 million for great causes and Elizabeth is regarded by many as one of most important and influential women in Bristol’s history.

“Both are inspirational figures, deservedly featuring in our 100 Great Westerners, and being celebrated on our new Intercity Express Trains.”