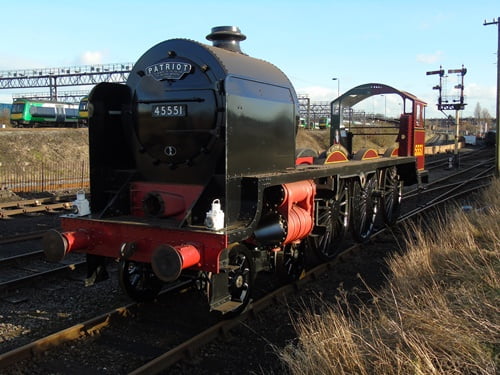 The LMS Patriot Project has announced their new boiler contractors after the L&NWR Heritage decided to stop the original contract work.

The new contractors, Heritage Boiler Steam Services (HBSS), have signed up to complete the work. The company has been set up by Andrew Wilcock and Robert Adamson, after they both left employment at the L&NWR Heritage on the 24th November.

The duo will operate from part of the West Shed at Ripley in Derbyshire.

Work on the LMS Patriot Boiler will start in the first week of December with a targetted completion of January 2019 (or earlier).

Andrew and Robert both have 30 years experience in boiler repair and construction between them.

The decision by L&NWR prompted Robert and Andrew to leave the site and approach the project about them completing the boiler.

Major decisions made on steam locomotive 5551 The Unknown Warrior

Work to resume on steam locomotive 5551 The Unknown Warrior

This will be the first large traditional boiler built for a British operator since 1962.

How will the LMS Patriot Project support HBSS?

The Project will be supporting the new company by providing them with a mobile crane (an asset of the projects), HBSS will then buy the crane at the original purchase price from the Project once the boiler is complete.

They will also be purchasing the components (e.g. tubes) direct from the manufacturers and giving HBSS them free of charge.

The project has also shown HBSS their next project/next contract of the converted 8F boiler for County of Glamorgan.