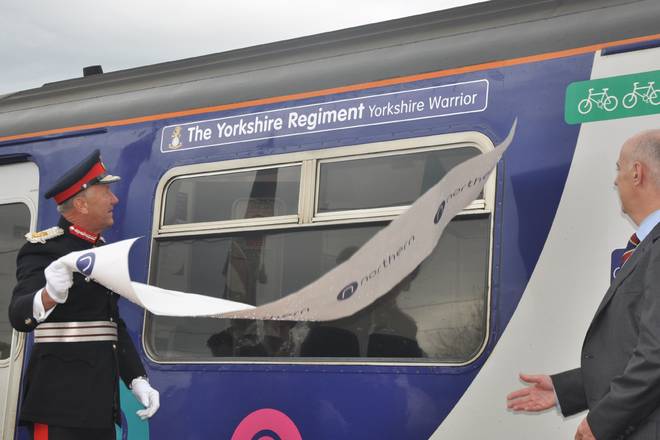 Northern have named one of its newly refurbished Class 150 trains, in honour of the Yorkshire Regiment – The Yorkshire Warrior.

York Railway Station was the location for the unveiling.

The unveiling saw the Yorkshire Regiments band perform, while a guard welcomed the Lord Lieutenant of North Yorkshire, Barry Dodd CBE, The Lord Mayor of York, Barbara Boyce and the Sherriff of York, Gill Brian, on board 150275.

Yorkshire tea and cake after the ceremony was enjoyed by the guests.

Mike Paterson, Northern’s Regional Director, said: “We are proud to be Northern and that sentiment is something that resonates well with the Yorkshire Regiment, which is steeped in heritage and tradition. We’re delighted to have joined forces with the regiment and, as an active employer of ex-service personnel, we’re sure that the Yorkshire Warrior is a fitting tribute.”

Northern Class 150 No. 150275 The Yorkshire Warriors operates on the line between York and Harrogate.