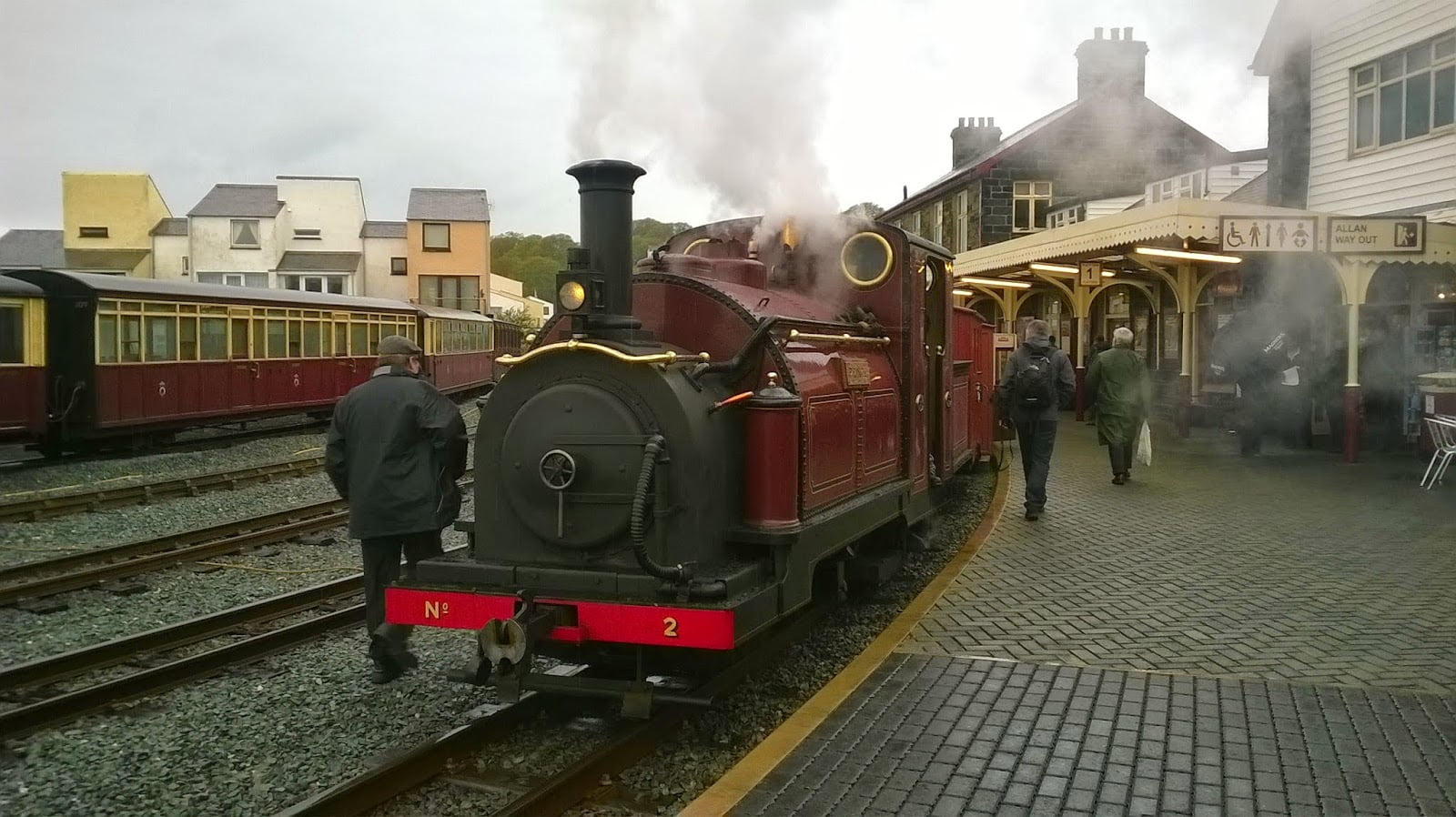 No.2 Prince waiting for departure with the 9:30am from Harbour Station

This is the blog post for the day, a video  is also available.

Saturday was a wet and windy day, but I still ventured out to Harbour Station to watch some trains…

The theme for the day was 1920s/1930s Colonel Stevens era, this saw a wide variety of vintage trains. These were short trains, without being connected by means of a walk through, like modern day carriages.

The first train to depart was the 7:15am departure headed by England Loco “Palmerston“, the rain. Although this got me very wet, it made for some very good photos. Taliesin departed for Rhyd Ddu at 8:10, I didn’t get any pictures of the engine, but I got a video of it departing. This will be in my YouTube video, which will be uploaded soon.

The next Train to depart was the 8:40 headed this time by Double Fairlie “Merddin Emrys“, again this was a short vintage train with a set of carriages from 1870s era. The rain was still pouring down so I kept under canopy.

There was then a break for about 40 minutes until the next train, so I thought I would pop into Spooners Restaurant for a spot of breakfast. I had a Bacon and Sausage Sandwich, this set me up for a day of train spotting very well. I Highly Recommend Spooners if your spending a day at station, fantastic service and quality food!

After Breakfast, the train next to depart Porthmadog was the 9:30 train hauled by No.2 England Loco “Prince“, the rain was still pouring down. This train had Carriages from the “Col Stephens” era, these Coaches showed how times have changed. Some carriages just having wooden benches, with not much Suspension.

The Garratt left at 9:40, but due to the rain I decided to leave it out.

Freshly repainted Double Fairlie “David Lloyd George” was next out of Harbour Station, this was the normal 10:10 departure to Blaenau Ffestiniog. The Carriages were the normal Buffet Service, with the rain still coming out I ventured out onto the platform to see the new paint work on DLG. Last year DLG was painted in “ex-works Grey”, for this year it was repainted in its original Red Livery.

I then went back into Spooners and the shop because of the rain, as my tripod was getting pretty wet. I didn’t really want it getting anymore wet than it needed to.

By the time the rain had died off enough for me to get back outside without getting to wet, it was time for Linda and Blanche to Double-Head the 11:35 departure to Blaenau Ffestiniog. The station was getting slowly busier as the day went on. However I would say it never got “packed” throughout Saturday of Ffestiniog 150 Years of Passenger Trains.

Blanche was recently converted back to coal firing after being on oil-firing for a while, the two ladies were out in the Easter holidays, but both were now facing the “correct” way now.

After Linda and Blanche had departed, Merddin Emrys arrived back with the 10:10 ex-Blaenau service to Porthmadog, its next duty was the 14:10 service to Rhyd Ddu. This service had carriages from the 1920s era, and had more comfier seats than the ones found with Prince.

As the weather had improved a little, a couple more pictures were taken. Prince was next to depart, but had to wait for Palmerston to return.
Once Palmerston was in Platform 1, it was time for Prince to depart, with the weather turning again.

I unfortunately missed this train departing, due to it being time for a spot of lunch. However, Prince departed with the set of carriages from the Col Stephens era.

The Garratt arrived at Porthmadog Harbour with the train from Caernarfon, at the same time Linda and Blanche were waiting for the departure of the 15:50pm service to Blaenau Ffestiniog. The rain pouring down again, I managed to get a few pictures of two trains together.

After the Double Headed had departed for Blaenau Ffestiniog, the Garratt ran around its train ready for its return journey to Caernarfon. According to some people, Rhyd Ddu was having a spot of snow, so was Porthmadog, luckily wasn’t to much.

With the weather turning worse by the minute, I decided to call it a day.

Before I left, I decided to see DLG putting its carriages into the sidings, here’s a few photos…

For Saturday, the weather was terrible for most of the day so apologies about not getting every departure. Camera pictures captured entirely on a Nokia Lumia 1320

This is only one day, I attended 3 days, so check out Sunday and Monday’s post of Ffestiniog 150 Years of Passenger Trains

A big big thank you to the Ffestiniog Railway for putting a brilliant show on, even though the weather wasn’t great!

The first fire has been lit in the firebox of NG/G16 steam locomotive No. 130 at Dinas on...